CN Drinks is an award winning, family run, independent company, based in Devon and was established in March 2012 by Chris Norcott and his wife Nicola.

Chris was working as a Senior National Accounts Manager for a large national cider producer and felt that the expertise he had gained within the cider industry over the previous 10 years gave him the insight to identify a gap in the market.

Fruit ciders were becoming increasingly popular but those available were often overly sweet and Chris saw the opportunity to create a range of lighter, more refreshing ciders, which were produced locally using quality ingredients.

With the support of his wife Nicola, Chris left his job and invested everything into the new company.

The Norcotts range of ciders became available in August 2012 and Chris has worked hard ever since to build strong working relationships with suppliers and individual customers.

The ethos of the company is to produce quality ciders at an affordable price and to support accounts we supply and the local communities. Awareness of the product has increased greatly since 2012 and Chris, Nicola and even new arrival baby Barney can be seen regularly at tastings in the local area. 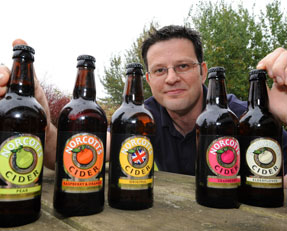 Norcotts Cider - Did You Know?